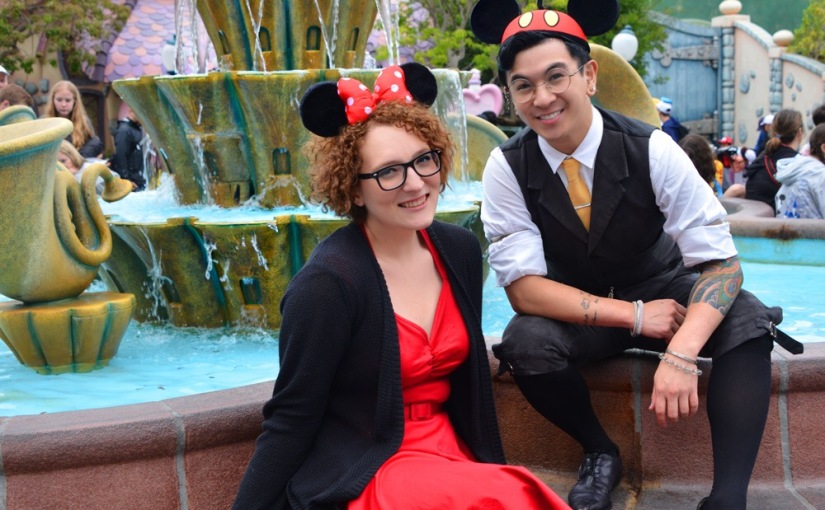 So what’s a girl to do when she’s never cosplayed before in her life and suddenly she has to find not one, but multiple outfits for nearly a week of filming and photography? Panic. Panic and go through every item of clothing she has to see if she has ANYTHING that is useful. I didn’t need full blown cosplays that take weeks to put together. Hell, I barely had a week to prepare! What I needed was something inspired by Disney characters. But how was I to do that?

The answer apparently is called DisneyBounding. 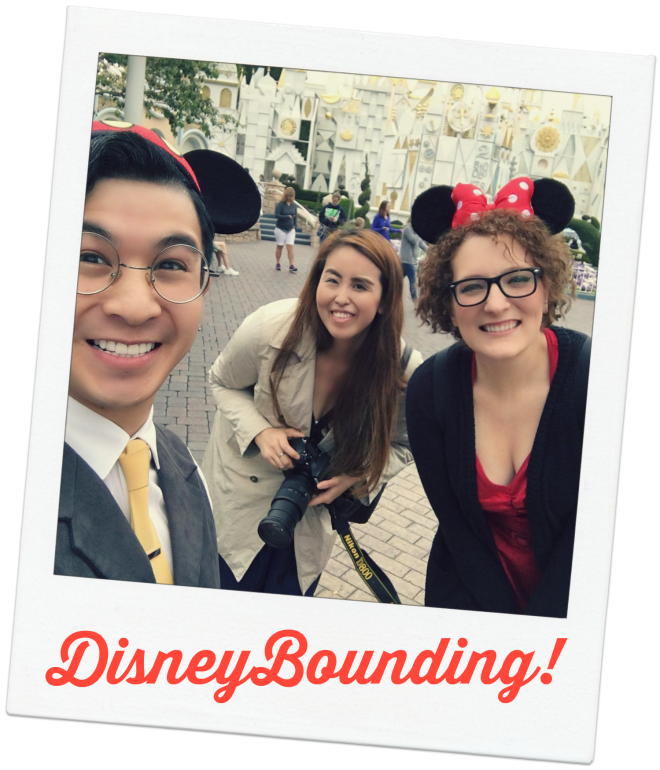 So what is DisneyBounding? The idea was started by Leslie Kay, who had been a long time Disney and fashion fan and wanted to combine the two in a fun and easy way. Her site disneybound.co even describes the idea as:

DisneyBound is meant to be inspiration for you to pull together your own outfits which work for your body and wallet whether from your closet or local mall.

And that’s it! It immediately reminded me of ‘closet cosplay’ in that you look in your closet and see what you have that reminds you of the character you wish to portray. And that’s exactly what I did when Alston told me we should match our outfits for all our Disney days. He liked what I was doing with The Nerdventurists and wanted to collaborate, I thought that was a great idea and we quickly got to thinking about what we could do. People dangerously left us alone and suddenly we had hatched out a plan to go to all the Disney parks around the world. Yurp. That’s a thing. And not only that, these Disney Adventures were going to be done in style. Cosplay DisneyBounding style.

I sort of panicked. I have never cosplayed before. With curly hair and glasses, there aren’t a lot of options open to me, so I had never really bothered. Alston on the other hand had done amazing cosplays of various sorts, always looked nice, and I was going to be an embarrassment in all our photos. He assured me that I wouldn’t and eventually I sent him a photo of a 1950s red dress I had. Minnie Mouse, maybe? He agreed and a few days later we were off to LA.

I was so nervous at first. I kept straightening my dress, fixing my ears, and generally felt super self conscious. But then people kept coming up to us saying how cute we were, they were taking photos of us taking photos. I didn’t feel as weird. I felt cute instead. Yeah, I was a fucking adorable Minnie Mouse-esque lady! We were practically oozing adorableness, we should embrace this! And so we did. By the end of the day I had “got” it. I knew why people cosplayed; point blank, it’s fun! You get to sort of become a character, you get to look good and people tell you that you look good/cute/amazing/insane/etc. Who wouldn’t like that? But at its core, it’s just a really fun time. 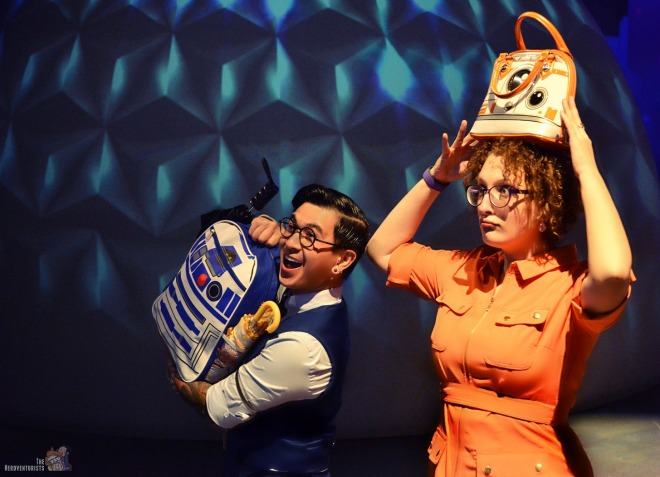 So when it was time for Walt Disney World in Orlando, I didn’t have nearly as many reservations. We were going to Star Wars it up by being BB8 and R2D2. The first day was the more casual of the two, and ht eonly thing I had to do was find an orange dress (which was surprisingly not as hard as I thought, and I found this cool sorta military/sciency esque number on sale, hollah!) And even better, Dapper Day was happening while we were there. The level of excitement Alston had couldn’t be contained and he quickly MADE ME A HAT so I could be a 1920s BB8. HE MADE ME A HAT.

Dapper Day was an event in itself because so many people were just dressed SO BEAUTIFULLY!  That whole self consciousness came rolling up again, but I quickly ignored it because I had an amazing hat and felt freaking amazing this day. Even if I was really really hot under that (synthetic) fur. Alston did have a hat… he just lost it on Splash Mountain (RIP R2D2 fedora). But the fact was, we had a lot of fun, people recognized what we were trying to do, and I really just felt quite good about myself. Which is always nice. 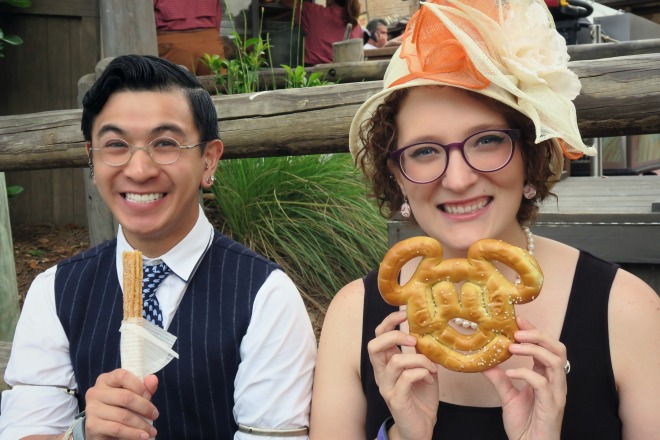 I have a lot of respect for people who do this constantly and more extensively. I was stressing out just from this, I cannot imagine having to actually construct outfits and sew them and try and find replicas of things. I am immensely in awe of all of you. I hope one day I’ll graduate from closet cosplay to something bigger, but until then, I’ll have fun with this and see if I can’t do some more of it.

If you want to keep updated on Disney Adventures, head on over to The Nerdventurists, my travel site. Things will be rolling out across the summer for sure. In the meantime, have a funny photo when I got scared shitless because storm troopers snuck up on us.

Noriko Sugiura was our amazing photographer and camera lady and we wouldn’t look nearly as good without her mad skillz. Also make sure to check out Alston’s fashion site! 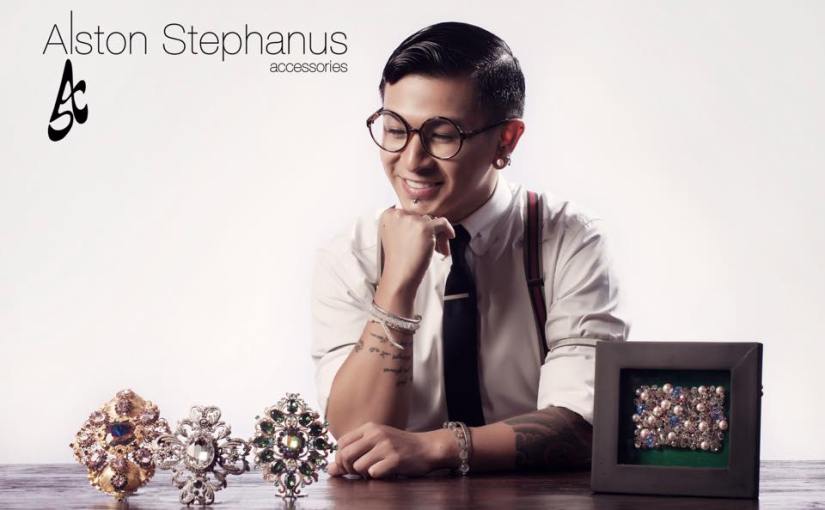 Swarovski crystals. French lace. And more feathers than the fanciest of birds.

These are just some of the defining features of Jakarta born Alston Stephanus’ fashion designs. In 2005 this creative young man created his own accessories company, redefining what Indonesian fashion was through mixing Victorian glamour with traditional Javanese Keraton. It’s nature and wildlife with elegance and a touch of whimsy, and it’s 100% Alston.

And what’s particularly amazing is that he never attended any sort of fashion school, his training all done on his own out of sheer determination. And a great deal of skill.

So how did Alston Stephanus Accessories get started? Alston says he “…was first drawn to fashion from [his] family, which gradually progressed into dressing up [his] friends for their special events like prom.” His hobby continued to grow and grow until he realized he needed to take the next step, so he created his “own accessories company based on what [he] loved to do. Connecting the animation world to reality by using unusually different materials to make accessories has always been a source of inspiration…”

With ten years of success behind him now, it’s hard to choose just one thing to be proud of. However, when it comes down to it, what he’s taken away from the previous decade is both humbling and powerful.

“I am proudest of the fact that I can present a fantasy interpretation of my motherland culture, Indonesia, for the world to see.”

On a world stage that is so dominated by high end European fashion, the fact Alston can, in some way, highlight the rich culture and creativity of Indonesia is wonderful. It’s an exploration of an aesthetic not as well known, and his pioneering is to be commended. One of his muses is Dewi Sri, the Indonesian Rice Goddess. Her elaborate headpieces and representation of the harvest and nature is clearly seen throughout a lot of his work, and the fact Alston can and does use traditional Indonesian lore and is being celebrated for it is quite significant in the fashion world.

And on the flip side of all that, Alston Stephanus is “…also very proud that [he] can break out of the norm from the Indonesian fashion industry.” And this stems from his involvement in the world of burlesque, cabaret, cosplay, and the circus… which is a pretty far cry from the pageant stage. Though perhaps it’s not so great a leap, given his passion for the sublime and playful. “My projects within these interests have been the most satisfying.” And it’s not hard to see why.His work in Indonesia is lauded, especially as he’s the official designer of the magnificent crowns and accessories for the Miss Tourism Indonesia pageant as well as Miss Earth Indonesia, whose outfit was inspired by Ibu Pertiwi, the national personification of Indonesia. The latter came about because of his collaboration with high-end haute couture designer Rusly Tjohnardi Atelier to create the best National costume in Asia for the Miss Earth 2013 pageant, as worn by Indonesia’s Nita Sofiani.

Alston’s Keraton inspired Queen Amidala costume was 1 of 15 selected to compete in the “Best of Star Wars” category at the Disney D23 Expo Costume Competition. In addition he designed a high fashion Darth Vader for The Masterpiece Strikes Back: A Fashion Exploration last year. But I’ll have more on that when the force strikes back in December ;). 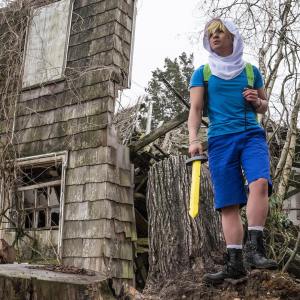 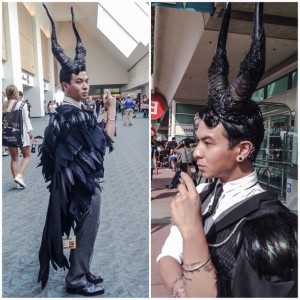 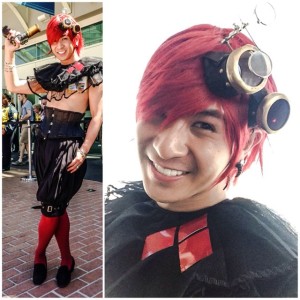 His cosplay portfolio is one to be admired, not only for the amazing pieces he’s created, but for the vision and re-creation, especially with his Maleficent and R2D2/Megaman. It’s good to know that nerds are everywhere. You can find more of his cosplay photos on his instagram.

From heroic myths to fantastical fairy tales, Alston’s inspiration is drawn from anything and everything whimsical; be it from nature, science fiction, anime, comics, or fantasy.

So what is his ultimate goal? “My vision for the Alston Stephanus Accessories brand would be to design accessories for something along the lines of the Star Wars films, or American Horror Story, Grim, Once Upon A Time, Game of Thrones, and The Librarians. Anything with a sense of fantasy and fairytale.” And he’s well on his way to doing that.

Luc Besson’s upcoming sci-fi project Valerian and The City of A Thousand Planets is holding a costume design contest and Alston is hard at work creating the perfect entry for this sci-fi odyssey. So what’s the challenge?

“Designers are asked to create a piece that could be worn by a human, alien, humanoid or any other intergalactic creature you can think of. The scene for which you are designing will take place at a political cocktail party inside a space station called Alpha and the year is 2580. Designers are encouraged to get inspired by the video to the right and read more about the costume specifications and film below.” [Source]

Twenty designers will be chosen by Filmmaker Luc Besson, Editor in Chief of Yahoo Style Joe Zee and Valerian Costume Designer Olivier Bériot. Those twenty will receive a $1,000 prize and might just have their design created and worn by actors in the film.

Least to say, Alston is more than excited about the contest that could put him one step closer to his dream of designing for film. He says that it would, of course, be amazing to win, but there’s also many possibilities that could come from his design. He’s just happy to be creating. And so are we, because we have exclusive illustrations and photos of his contest entry! 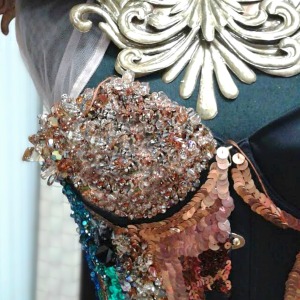 “My design is inspired from a Javanese knight.” In keeping with his roots, Javanese culture has been a hallmark of Alston’s work since the beginning. And it’s that same muse, Dewi Sri, that has inspired his design. From the headpiece that is inspired by grass and rice fields (Dewi Sri is the Goddess of Rice) to the body of the design that represents “Ray of Light” (she protects against hunger, hence sun to make the harvest grow), it’s frankly, rather stunning. And more importantly, rich in culture. 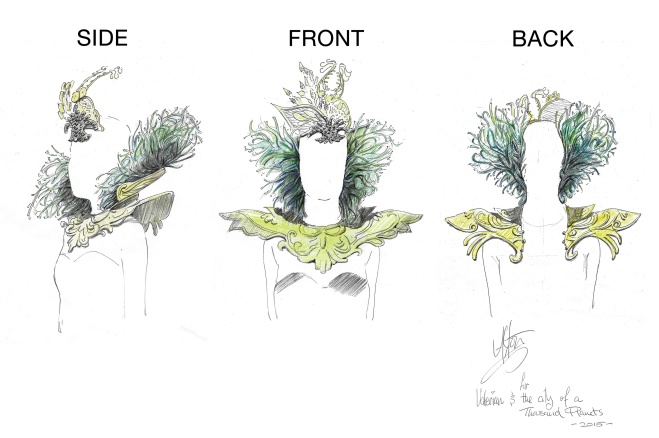 “I’m making a female version of the traditional armor and bringing in a sense of nature as well.” This costume is his version of royalty at war and will include full metal works in the skirt. The shoulder piece is even based off traditional Wayang armor. It’s appropriate for Valerian because it is definitely out of this world.

In the end, this might of fashion ingenuity wants to “make Alston Stephanus Accessories not just a brand, but also a lifestyle.” From wearable pieces of art to ingenious cosplay to movie worthy design, I daresay he’ll make it.