I swear, every time BioWare comes out with something new I make a sound that only dogs can hear. You can now log into the Dragon Age Keep, where you record all the decisions you’ve made from all the games, and PRINT THEM OUT. BioWare has partnered with CanvasPop for this and good golly they look gorgeous.

Yes, you can now have a poster/canvas/MURAL of all your decisions in the beautiful Dragon Age Keep artwork. You have the choice between all your games being shown, or just one or two. You also have the choice between a canvas print or a framed paper print. Just log in to The Keep, load in your chosen world states, and then click Print. There’s also a helpful tutorial when you log in now.

I went through a did this, curious as to the process and the price. Also it’s funny to see how much MAGE TRASH I am. Look, I wish I could use magic. So I will always play a mage as my canon whatever. If you’re curious, here are my canon world states.

I clearly have a thing for suffering blondes as well…

So I clicked print to see what was up and my full timeline came into view.

It’s quite neat to see it all laid out like that. Now, once you get to CanvasPopyou can move things around, choose different images to represent various things, etc. The possibilities are endless and there’s numerous layouts to choose from. The cheapest I could manage was $88 (ouch). Then again, I didn’t think this would be cheap anyways. At least we know the images will be hi-res and beautiful, but I’m interested to see how these turn out to whoever orders them!

In the meantime, I’ll go cry over my bank account. 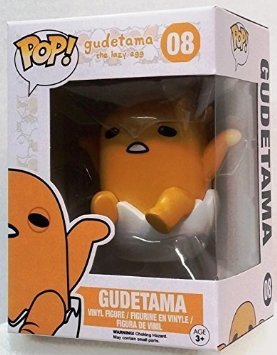 Ironically, the last time I did one of these 5 Fandom Friday posts (created by my friend Megan at The Nerdy Girlie) was around this exact time last year. And it’s pretty much on the same topic. One day I’ll do these weekly. But for now tis the holiday season, and as such, here is another nerdy wishlist from yours truly!

2. I can’t drink wine. I’m either allergic or very intolerant to tannins in addition to having an alcohol intolerance to most of the world’s adult beverages (it’s a sad and very long story), but I love this glass. I spied it on Your Joyologist and just fell in love. I try to challenge myself daily, to do the scary or the crazy thing. So this mantra is something I both live by and need to hear ever so often when I get cold feet. Plus it’s classy as fuck.

3. Gudetama!!!!! The lazy egg from Sanrio is the cutest and weirdest thing. When I was in Japan in September I discovered him with help to one of my former students. It was love at first sight and I now own quite an array of Gudetama merchandise. I don’t know what it is about him, but he gives me life. I only have a few Pop!  and Funko figurines, but he needs to join them. He had a series of shorts thanks to Sanrio on YouTube. They’re all delightfully odd.

4. Nug Plush! If you’ve spent any time here, especially on my twitter, you know I’m obsessed with Dragon Age. Nugs are the cure little wrinkly rabbit-like things that parade all over the place. I seem to have a thing for odd yet cute things… hmmm. I can’t have a real Nug of my own, but I can get myself a fuzzy plushy one from the BioWare store.

5. Canon EOS Rebel T3i DSLR (Canon) A repeat from last year because one day I’ll be able to afford a nice camera again, and when I do, it’ll be from the Canon Rebel line… because they’re the best. Fight me.

Cole: Your clothes look like the Fade, Dorian.
Dorian: The stuff of dreams? An explosion of color and sensation wrapped in an enigma?
Cole: It’s shiny.

If you follow me on twitter or tumblr, then you know I am epically obsessed with Dragon Age. It’s BioWare’s fantasy baby and was a HUGE part of my life last year when I didn’t really have anything. I dove in without knowing anything about the series and fell, as my friend Ardy put it, “heart first.”

And I really did. I’ve clocked an alarming amount of hours on Dragon Age: Inquisition between my current FIVE playthroughs and I’ve beaten the first two in the series multiple times as well. The lore is rich, the characters well developed and interesting and complex, and everything is pretty with lots of magic. I like magic. It was instrumental in getting me back into gaming and has broaden my horizons considerably in terms of the media I enjoy. Long had I thought my love of fantasy was dead when the Lord of the Rings movie trilogy ended, but I’m back to being fantasy loving trash. And I mean that in the most sincere way possible. It’s a great genre and is endless in its possibilities. So thanks for that.

One of the first things I do when I fall in love with something is scour the internet to buy things to show how much I love it. So finding official and fan made Dragon Age merchandise was my number one goal for a good few weeks. I initially got my hands on the Cullen tank and Tevinter hoodie and more stickers of the characters than I care to admit, and that was fabulous. And then rumors started spreading that BioWare and ThinkGeek were creating some new items. Eventually these were revealed at a fashion show at PAX Prime to much delight and squeals and much of the internet opening their wallets. Everything looked amazing, and better yet, it looked unique. These weren’t just the run-of-the-mill t-shirts with the logo on them, no, these pieces were actually conceptualized and reflected the characters. And they were interesting pieces in terms of their construction as well. I was immediately impressed and the more I learned about what BioWare and ThinkGeek were working on, the more jazzed I got.

The Dragon Age Fall Collection dropped today at the Bio Ware store and immediately my timeline exploded. And it’s not had to see why. The stuff looks stellar. These were all created in conjunction with ThinkGeek Solutions, and it’s a partnership I never want to see die.

Let’s also take a moment to really commend Bio Ware for catering to us ladies. Women are the majority of gamers, despite what G4merG4te wackos preach, and it’s nice to see that recognized in terms of merchandise.

But what’s even more important it supporting this, because the more merch women gamers buy, the more that will be generated. It’s a win-win for us really because we get more stuff and thus they will continue to make more for us. Bio Ware is really great at listening to its fan base, especially in comparison to other studios. Players have always had the option of playing as a man or woman and they’ve been including more homosexual, bisexual, and transgender characters, story lines, and romances in recent games.

And these characters have become very popular; case and point with Dorian Pavus getting his own hoodie! That sort of representation in terms of merchandise is still very rare today, so it’s great to see. Not to mention, I know the vast majority of my timeline is gunning for that hoodie because of their love of Dorian. That’s telling.

It’s important to support studios who do this, so make your voices heard and wear cute things as well!

You can pre-order the fall collection goodies at the BioWare store.

So it turns out when your mother buys a new house that needs a lot of renovation, that you sort of lose track of time and every day turns into a mix between sleeping and painting. So. Much. Painting. What horrible person decided you had to paint stone 5,000 times to make sure it’s mold and water proof?

So that’s basically where I’ve been… covered in various types and colors of paint, and it’s not even done yet. Don’t get me wrong, I enjoy helping my mom out, but I think I will forever have claw hands.

To relax after days of hard(ish) labour, I’ve been playing a lot of video games. Be in Legend of Zelda: Ocarina of Time on Nintendo 3DS or The Sims. At first I picked up my old Harvest Moon: Animal Parade game. Got hitched. Had a baby. Tended my crops. I love Harvest Moon to pieces because it’s a farming simulations and it’s charming and sweet and SO ADDICTIVE.

END_OF_DOCUMENT_TOKEN_TO_BE_REPLACED

So my super awesome friend ( and co-SherlockeDCC host) Megan runs The Nerdy Girlie, and a number of weeks ago she started 5 Fandom Friday, where geek blogs all over would post weekly about a pre-determined topic and share their thoughts on said topic. It’s a great idea and I’ve been meaning to jump on board for awhile, but I’ve finally gotten my act together! Call it the holiday spirit ;)

So! This week is all about what nerdy Christmas gifts we want and here are my deepest geekiest desires this holiday season. My mom just bought a house, so Christmas this year is a bit different (we’re doing a family Secret Santa), so none of this is going to happen, but it’s still fun to “window shop” as it were. 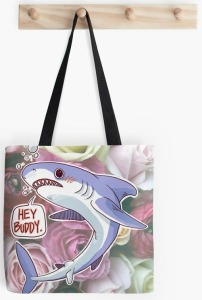 1. Hey Buddy tote bag (RedBubble). God I love tote bags. My friend Cara McGee has created an entire line of dumb sharks and they’re just hilarious. I really do need to pick one of these up!

2. ALL THE DRAGON AGE BOOKS (Amazon)! I picked up the Dragon Age Inquisition art book and it’s GORGEOUS. It’s just phenomenal to look at the depth of detail BioWare put into the world building and careful considerations of every single character. I am a recent and hard-hit Dragon Age convert and I tend to submerse myself in new found obsessions. Bring it on.

3. TARDIS bathrobe (ThinkGeek). Because who DOESN’T want to travel all of time in space in a fuzzy bathrobe? Sadly it doesn’t come with a Peter Capaldi.

4. Wake Up Light Alarm Clock (Philips). I live in the basement where it is dark and cozy and no matter what I do, my phone’s multiple alarms just aren’t getting me out of bed. The bright light suddenly blinds me and I cocoon back up. I’ve heard a lot of great things about these natural light alarm clock that gradually lighten up the room to wake you up easier. I think it’d really work for me and for the other night owls out there.

5. Canon EOS Rebel T3i DSLR (Canon) Ah. The biggie. I could be even more ridiculous and ask for the $1500 model, but let’s be a LITTLE realistic, eh? My manual SLR was stole a few years ago when my flat was broken into and ever since I’ve been without a real camera. I’ve got a point and shoot, but it’s from my time in Japan (five years ago now) and the focus has been gone for about a year and it doesn’t really… work. I love the Canon line of cameras and my SLR was an EOS Rebel. Some form of DSLR has been on my wishlist for years. One day.

Well, that’s my list for today! You can read Megan’s here and learn all about 5 Fandom Friday! Join on in! What’s your nerdy Christmas list?